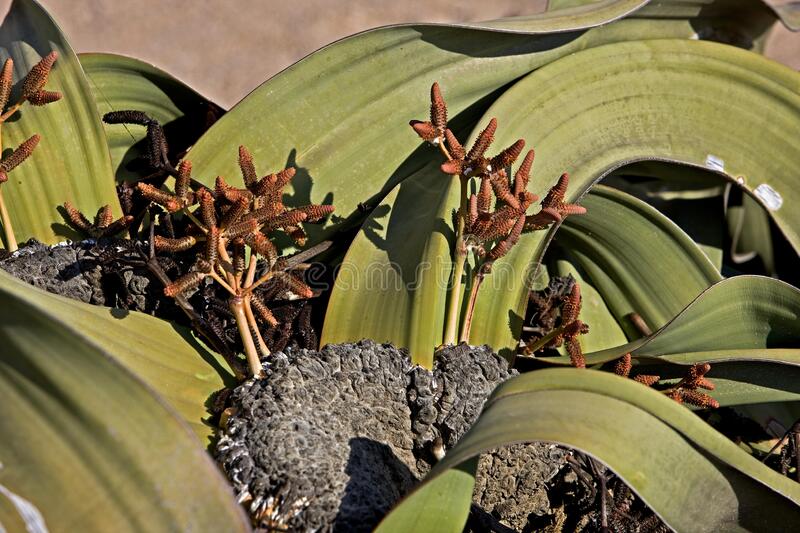 Events in the genome of Welwitschia have given it the ability to survive in an unforgiving desert for thousands of years.

Welwitschia, a two-leafed plant that grows in parts of the Namib Desert in southern Africa, can live for more than 1,000 years.By Richard SimaJuly 31, 2021

The longest-lived leaves in the plant kingdom can be found only in the harsh, hyperarid desert that crosses the boundary between southern Angola and northern Namibia.

A desert is not, of course, the most hospitable place for living things to grow anything, let alone leafy greens, but the Namib Desert — the world’s oldest with parts receiving less than two inches of precipitation a year — is where Welwitschia calls home.

In Afrikaans, the plant is named “tweeblaarkanniedood,” which means “two leaves that cannot die.” The naming is apt: Welwitschia grows only two leaves — and continuously — in a lifetime that can last millenniums.

“Most plants develop a leaf, and that’s it,” said Andrew Leitch, a plant geneticist at Queen Mary University of London. “This plant can live thousands of years, and it never stops growing. When it does stop growing, it’s dead.”

Some of the largest plants are believed to be over 3,000 years old, with two leaves steadily growing since the beginning of the Iron Age, when the Phoenician alphabet was invented and David was crowned King of Israel.

By some accounts, Welwitschia is not much to look at. Its two fibrous leaves, buffeted by dry desert winds and fed on by thirsty animals, become shredded and curled over time, giving Welwitschia a distinctly octopus-like look. One 19th-century director of Kew Gardens in London remarked, “it is out of the question the most wonderful plant ever brought to this country and one of the ugliest.”

But since it was first discovered, Welwitschia has captivated biologists including Charles Darwin and the botanist Friedrich Welwitsch after whom the plant is named: It is said that when Welwitsch first came across the plant in 1859, “he could do nothing but kneel down on the burning soil and gaze at it, half in fear lest a touch should prove it a figment of the imagination.”

In a study published this month in Nature Communications, researchers report some of the genetic secrets behind Welwitschia’s unique shape, extreme longevity and profound resilience.

Jim Leebens-Mack, a plant biologist at the University of Georgia not involved in the study, said it “gives us a foundation for better understanding how Welwitschia does all the crazy stuff that it does.” The Welwitschia genome reflects the plant’s arid and nutrient-poor surroundings. And its genetic history seems to correspond with environmental history.

Approximately 86 million years ago, after a mistake in cell division, the entire Welwitschia genome doubled during a time of increased aridity and prolonged drought in the region — and possibly the formation of the Namib Desert itself, said Tao Wan, a botanist at the Fairy Lake Botanical Garden in Shenzhen, China, and lead author of the study. He said that “extreme stress” is often associated with such genome duplication events.

Dr. Leitch, a co-author of the study, added that duplicated genes are also released from their original functions, potentially taking on new ones.

However, having more genetic material comes with a cost, Dr. Wan said. “The most basic activity for life is DNA replication, so if you have a big genome, it is really energy consuming to maintain life,” especially in such a harsh environment.

The researchers detected a “burst” of retrotransposons activity one to two million years ago, most likely because of increased temperature stress. But to counteract this, the Welwitschia genome underwent widespread epigenetic changes that silenced these junk DNA sequences, through a process called DNA methylation.

This process, along with other selective forces, drastically pared down the size and energetic maintenance cost of Welwitschia’s duplicated library of DNA, Dr. Wan said, giving it “a very efficient, low-cost genome.”

The study also found that Welwitschia had other genetic tweaks hidden up its leaves.

The average plant leaf grows from the plant’s apexes, or the tippy-tops of its stem and branches. But Welwitschia’s original growing tip dies, and leaves instead pour out of a vulnerable area of the plant’s anatomy called the basal meristem, which supplies fresh cells to the growing plant, Dr. Wan said. A large number of copies or increased activity of some genes involved with efficient metabolism, cell growth and stress resilience in this area may help it continue to grow under extreme environmental stress. In a warming world, the genetic lessons Welwitschia has to offer may help humans breed hardier, less thirsty crops.

“When we see that the plant is able to live in this environment for so long and preserve its DNA and its proteins, I really feel like we can find hints for how to maybe improve agriculture,” Dr. Leebens-Mack said.

The study also underscores the importance of curiosity-driven research. When you encounter two leaves growing in a desert against all odds, kneel down in the burning soil and take a closer look.