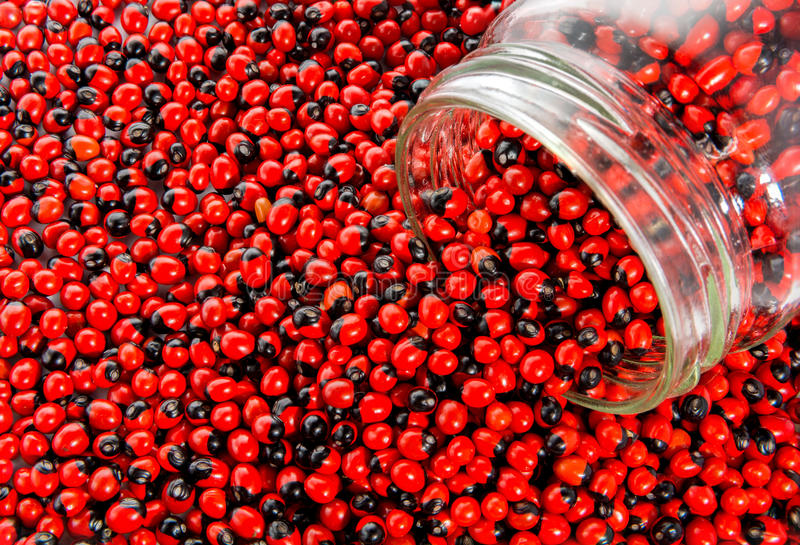 These seeds are posted for sale @ $4 per 5 seeds.Add $4pack/post to the order. These seeds will either help heal you or kill you. Be careful.

They are great for jewellery making because of their durability & bright colours.

Abrus precatorius, called “Gulaganji” in Kannada, kundu mani in Tamil, Guruvinda ginja in Telugu and ‘Kunni kuru’ in Malayalam, has been used in Siddha medicine for centuries. The white variety is used to prepare oil that is claimed to be an aphrodisiac. A tea is made from the leaves and used for fevers, coughs and colds. Seeds are poisonous and therefore are only consumed after heat treatment. The Tamil Siddhars knew about the toxic effects in plants and suggested various methods which is called “suththi seythal” or purification. This is done by boiling the seeds in milk and then drying them. Like with castor oil, the protein toxin is denatured when subjected to high temperatures rendering it innocuous.

The 1889 book ‘The Useful Native Plants of Australia’ records that “The roots of this plant are used in India as a substitute for liquorice, though they are somewhat bitter. In Java the roots are considered demulcent.

The leaves, when mixed with honey, are applied to swellings, and in Jamaica are used as a substitute for tea. Under the name of “Jequirity” the seeds have recently been employed in cases of ophthalmia, a use to which they have long been put in India and Brazil.”

The plant is also used in Ayurvedaand is said to promote hair growth. It is sometimes used as an ingredient in Indian hair products.
Unit of measure

The seeds of Abrus precatorius are very consistent in weight, even under different moisture conditions due to the water-impermeable seed-coat.Formerly Indians used these seeds to weigh gold using a measure called a Ratti, where 8 Ratti = 1 Masha; 12 Masha = 1 Tola (11.6 Grams).
Jewelry

The seeds of Abrus precatorius are much valued in native jewelry for their bright coloration. Most beans are black and red, reminiscent of a ladybug, though other colors exist. Jewelry-making with jequirity seeds is rumoured to be somewhat hazardous. There are persistent reports that the workers who pierce the seeds in order to thread them can suffer poisoning or even death from a pinprick, but there seems to be little evidence. An online search found 265 scientific papers referring to Abrus precatorius, but not one of them dealt with occupational poisoning.

In Trinidad in the West Indies the brightly colored seeds are strung into bracelets and worn around the wrist or ankle to ward off jumbies or evil spirits and “mal-yeux”—the evil eye. The Tamils use Abrus seeds of different colors. The red variety with black eye is the most common, but there are black, white and green varieties as well.

In March 2012 a recall was issued for bracelets made using Jequirity Beans
The toxin abrin is a dimer consisting of two protein subunits, termed A and B. The B chain facilitates abrin’s entry into a cell by bonding to certain transport proteins on cell membranes, which then transport the toxin into the cell. Once inside the cell, the A chain prevents protein synthesis by inactivating the 26S subunit of the ribosome. One molecule of abrin will inactivate up to 1,500 ribosomes per second.

The seeds of Crab’s eye should be tied in two layered cloth. Hang it in cow milk which is kept in a pot. Boil the milk with seeds hanging for about 3 hours (1 yama). It is known as Swedana. Then take out the seeds and wash it in hot water. Dry it and preserve. For this purpose the pot is used which is known as Dola Yantra. The fermented liquid could be used instead of milk.

Symptoms are identical to those of ricin, except abrin is more toxic by almost two orders of magnitude; the fatal dose of abrin is approximately 1/75 that of the fatal dose of ricin (though the abrin in ingested seeds may be absorbed much more slowly than the ricin in Ricinus communis even if the seeds are chewed and the coat penetrated, .Symptoms of poisoning include nausea, vomiting, convulsions, liver failure, and death.