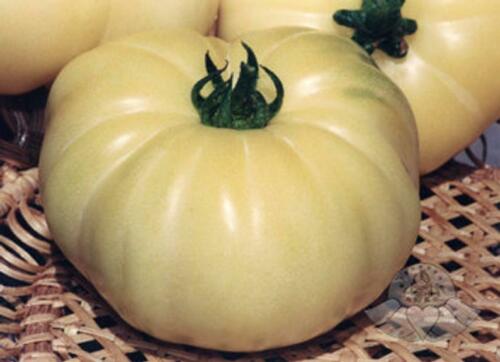 DESCRIPTION:
Tomato, or tomato (Solanum lycopersicum) is a species of herbaceous annual and perennial plants that belongs to the genus Solanum of the Solanaceae family. This plant is grown as a vegetable crop, and it is very popular in all countries. In the people it is called “tomato fruit” – “pomo d’oro”, which is translated from Italian as”golden apple”.

The name tomato comes from the Aztec “tomatl”, it was improved by the French to the modern form. This culture is native to South America, and today it can still be found in natural conditions.

the 15th century. It went with the sailors to Spain and Portugal, and from there – to France, Italy and other European countries that are more remote from the sea routes.Previously, the tomato was grown as an exotic plant, since its fruits were considered inedible for a long time. In 1692, in Naples, a recipe for a supposedly Spanish tomato dish first appeared in the cookbook.The rapidly forming rod-shaped branched system of tomato roots goes to a depth of 100 cm or more, in width it grows by 150-250 cm. The peculiarity of this plant is that additional roots can develop on any part of the shoot. In this regard, tomatoes can be propagated by seeds, as well as cuttings and ‘stepchildren’.

An erect or decumbent branching stem can have a height of 0.3-2 m or even more. Non-pinnate leaf plates are dissected into large lobes, in some varieties they are similar to the foliage of potatoes. Racemes consist of small unsightly flowers that can be colored in different shades of yellow. The flowers are bisexual, each having male and female organs.

The fruit is a multi-nesting which can have different shapes, namely: ellipsoid, round and cylindrical. The weight of the fruit can vary from 30 to 800 grams. Depending on the variety, the fruits are colored in orange, crimson, greenish, rich yellow, brown, almost black, pinkish, rich red, white,yellowish, golden yellow or purple. Small and flat seeds are pointed at the base, they are colored in various shades of yellow, on their surface there is a pubescence that gives them a pale gray color. Seeds retain their germination for 6-8 years. Tomatoes in the botanical sense are berries, but in 1893 the Supreme Court of the United States, and in 2001 the European Union decided to consider tomatoes as vegetables, and not fruits, like all other berries.

CARE INSTRUCTIONS:
Sow the seeds for seedlings should be in the second half of March. Planting seedlings in open soil, depending on the variety, is carried out 45-60 days after the appearance of seedlings.Illumination. It needs a lot of bright sunlight.The ground. It should be warm, loose, rich in organic matter, moderately moist and slightly acidic or neutral.Predecessors. Bad-representatives of the Solanaceae family, for example: tomatoes, potatoes, peppers, eggplants, etc. Good-carrots, onions,cabbage, cucumbers, zucchini, legumes.How to water. Water should be systematically drip method. For 1 bush, 1 liter of water is taken.Hilling. The first time you need to hoe after 8-12 days after transplanting into open soil, when the tomatoes will be watered. This procedure should be repeated 17-20 days after the first hilling.Side-shoot removing. 20 days after transplanting the seedlings into open soil.The mulching.