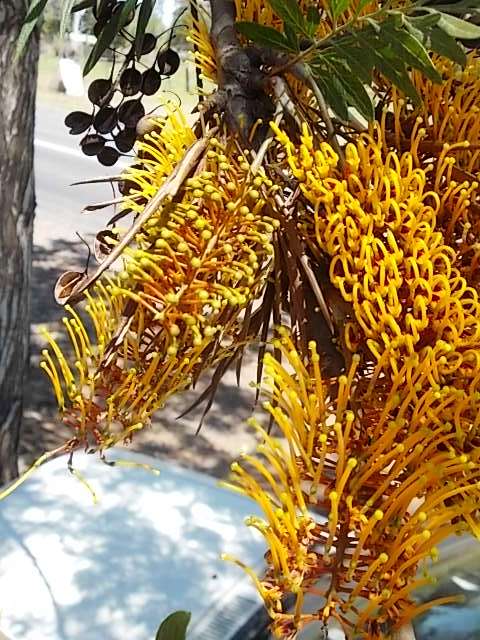 The Silky Oak trees for the $38 are small under 600mm, but bigger ones are available in sizes above that. Items under 1 metre can be posted say Australia post. Larger ones by pickup or courier Australia wide. Packing Posting & courier services charges are extra

Silky oak, also called Silk Oak, (Grevillea robusta), large tree native to Australia and also grown as a street tree in warm areas and, in its juvenile stage, as an indoor pot plant. It belongs to the family Proteaceae (see Proteales).

Grevillea robusta is a fast-growing evergreen tree with a single main trunk, growing to 5–40 m (20–100 ft) tall. The bark is dark grey and furrowed. Its leaves are fern-like, 10–34 cm (4–10 in) long, 9–15 cm (4–6 in) wide and divided with between 11 and 31 main lobes. Each lobe is sometimes further divided into as many as four, each one linear to narrow triangular in shape. It loses many of its leaves just before flowering.

The flowers are arranged in one-sided, “toothbrush”-like groups, sometimes branched, 12–15 cm (5–6 in) long. The carpel (the female part) of each flower has a stalk 21–28 mm (0.8–1 in) long. The flowers are glabrous and mostly yellowish orange, or sometimes reddish. Flowering occurs from September to November and the fruit that follows is a glabrous follicle.

Grevillea robusta was first formally described in 1830 by Robert Brown after an unpublished description by Allan Cunningham. The type specimen was collected by Cunningham on the eastern edge of Moreton Bay in 1827. Brown’s description was published in Supplementum primum Prodromi florae Novae Hollandiae. The specific epithet (robusta) is a Latin word meaning “strong like oak” or “robust”.

Silky oak occurs naturally on the coast and ranges in southern Queensland and in New South Wales as far south as Coffs Harbour where it grows in subtropical rainforest, dry rainforest and wet forests. It is now relatively rare in its natural habitat but has been widely planted, including on Norfolk Island and Lord Howe Island. It has become naturalised in many places, including on the Atherton Tableland in Australia and in South Africa, New Zealand, Hawaii, French Polynesia, Jamaica and Florida. It is regarded as a weed in parts of New South Wales and Victoria, as “invasive” in Hawaii and as an “invader” in South Africa.

Before the advent of aluminium, Grevillea robusta timber was widely used for external window joinery, as it is resistant to wood rot. It has been used in the manufacture of furniture, cabinetry, and fences. Owing to declining G. robusta populations, felling has been restricted.

Recently G. robusta has been used for side and back woods on guitars made by Larrivée and others, because of its tonal and aesthetic qualities.

When young, it can be grown as a houseplant where it can tolerate light shade, but it prefers full sun because it grows best in warm zones. If planted outside, young trees need protection on frosty nights. Once established it is hardier and tolerates temperatures down to −8 °C (18 °F). It needs occasional water but is otherwise fairly drought-resistant.

G. robusta is often used as stock for grafting difficult-to-grow grevilleas. It has been planted widely throughout the city of Kunming in south-western China, forming shady avenues.

G. robusta is grown in plantations in South Africa,and can also be grown alongside maize in agroforestry systems.

In the UK, G. robusta has gained the Royal Horticultural Society‘s Award of Garden Merit