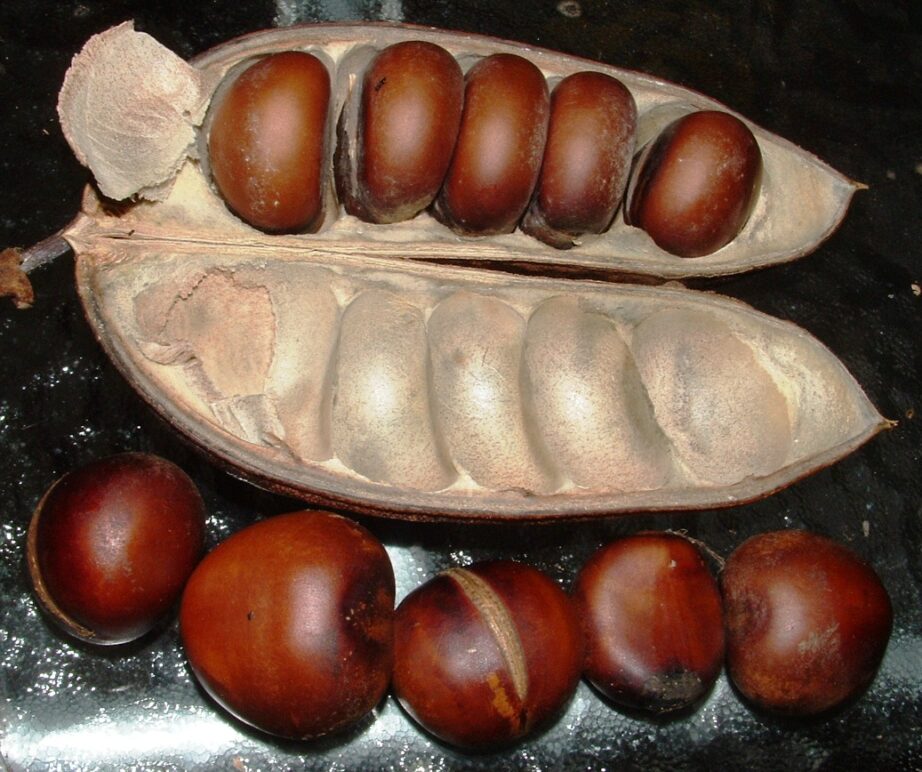 What is being offered 4 sale here are trees under a 1 metre in 20 litre growbags for $55 each. Pack/post is an extra charge of $32 for up to 4 plants sent Australia wide. Bags & most mix is removed from the tree for posting.

Castanospermum australe (Moreton Bay chestnut or blackbean), the only species in the genus Castanospermum, is a flowering plant in the family Fabaceae, native to the east coast of Australia in Queensland and New South Wales, and to the Pacific islands of Vanuatu, New Caledonia, and the island of New Britain (Papua New Guinea)

The fruit is a cylindrical pod 12–20 centimetres (4.7–7.9 in) long and 4–6 centimetres (1.6–2.4 in) diameter, the interior divided by a spongy substance into one to five cells, each of which contains a large chestnut-like seed.

In 1981, castanospermine was isolated from the seeds Members of this genus accumulate iminosugars in their leaves

Due to its importance as a food, the blackbean tree was a seasonal gathering point for Aboriginal peoples, and this acted as a catalyst for ceremonies. Songlines featuring the black bean seeds have been collected.[12] The bark fibre has been used for fish and animal traps, nets and baskets, and the empty seed pods have been used as toy boats Additionally, the tree has been used as a seasonal signal for when to hunt jungle fowl.

Food…The seeds are poisonous, and can cause vomiting and diarrhoea but become edible when carefully prepared by roasting, cutting up into small pieces, leaching with running water for several days, and pounding into flour and roasting it as a damper

The seeds have been prepared and eaten for at least 2,500 years.] The 1889 book ‘The Useful Native Plants of Australia’ notes and describes this use of the beans] As of 2012, the food was not used in modern bush tucker, and there was no nutritional information available on the seeds.
Ornamental use

The trees are popular as potted plants in Asia, Europe and America. In addition, they have been used as shade trees in landscaping for parks.
Wood

The wood was used by Aboriginal people for spear throwers. The timber, which somewhat resembles walnut, is soft, fine-grained, and takes a good polish. and the wood has a durability rating above-ground of over 40 years longevity.

Due to its significance as a food for Aboriginal people, blackbean trees were spread by hand into mountain areas on the east coast of Australia. All the trees in New South Wales are descended from a single seed.

The plant naturally spreads by water. It has been introduced to India, Malaysia, Papua New Guinea, Sri Lanka, South Africa and the United States of America.