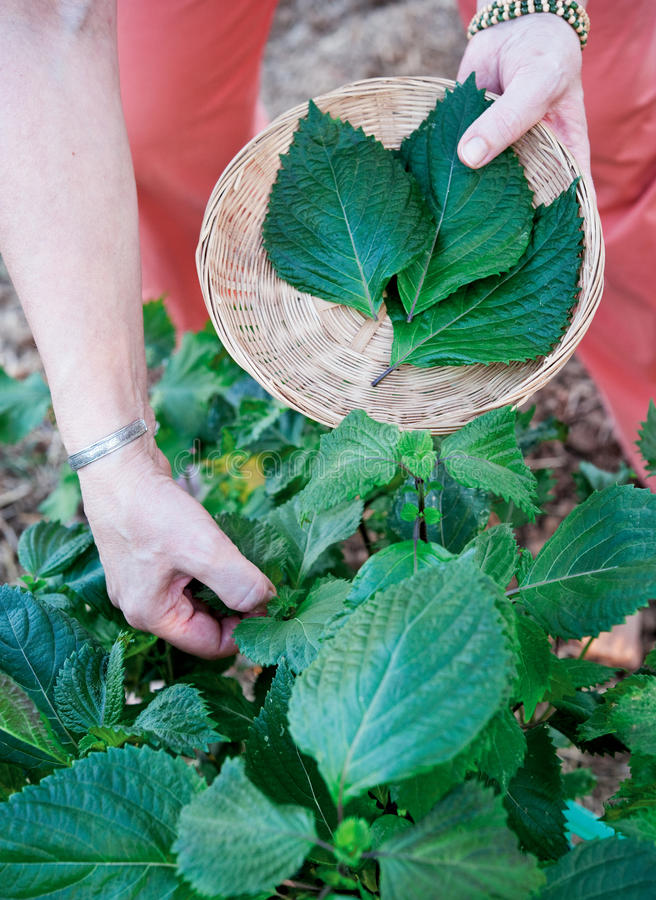 Perilla leaves are used in Chinese medicine to treat a wide variety of ailments, as well as in Asian cooking as a garnish and as a possible antidote to food poisoning. Leaf extracts have shown antioxidant, antiallergic, anti-inflammatory, antidepressant, anorexigenic, and tumor-preventing properties. However, there are limited clinical data to support perilla for any use.

Contraindications have not yet been identified.

Information regarding safety and efficacy in pregnancy and lactation is lacking.

Perilla oil may cause dermatitis.

Perilla is an annual herb indigenous to eastern Asia but which has become naturalized to the southeastern United States, particularly in semi-shaded, damp woodlands. The plant is attractive, with deep purple, square stems and reddish-purple leaves. The leaves are ovate, hairy, and petiolated, with ruffled or curly edges; some very large red leaves are reminiscent of a slice of raw beef, hence the common name of beefsteak plant. Small tubular flowers are borne on long spikes that arise from the leaf axils between July and October. The plant has a strong fragrance sometimes described as minty.

The leaves and seeds are widely eaten in Asia. In Japan, perilla leaves are used as a garnish on raw fish dishes serving the dual purposes of flavoring and as an antidote to possible food poisoning. The seeds are expressed to yield edible oil that is also used in commercial manufacturing processes for the production of varnishes, dyes, and inks. Dried leaves are used for many applications in Chinese herbal medicine, including treatment of respiratory conditions (eg, asthma, coughs, colds), as an antispasmodic, to induce sweating, to quell nausea, and to alleviate sunstroke.

Perilla leaves yield about 0.2% of a delicately fragrant essential oil that varies widely in composition and includes hydrocarbons, alcohols, aldehydes, ketones, and furan. The seeds have a fixed oil content of approximately 40%, with a large proportion of unsaturated fatty acids, mainly alpha-linoleic acid. The plant also contains pseudotannins and antioxidants typical of the mint family. An anthocyanin pigment, perillanin chloride, is responsible for the reddish-purple coloration of some cultivars. Several different chemotypes have been identified. In the most frequently cultivated chemotype, the main component is perillaldehyde, with smaller amounts of limonene, linalool, beta-caryophyllene, menthol, alpha-pinene, perillene, and elemicin. The oxime of perilla aldehyde (perillartin) is reported to be 2,000 times sweeter than sugar and is used as an artificial sweetener in Japan. Other compounds of possible commercial interest include citral, a pleasantly lemon-scented compound; rosefurane, used in the perfume industry; and simple phenylpropanoids of value to the pharmaceutical industry. Rosmarinic, ferulic, caffeic, and tormentic acids and luteolin, apigenin, and catechin have also been isolated from perilla, as well as long-chain policosanols of interest in platelet aggregation. A high myristin content renders certain chemotypes toxic; ketones, such as perilla ketone and isoegomaketone, found in others are potent pneumotoxins. High-performance liquid chromatography, gas, and thin-layer chromatography have all been used to identify chemical constituents.

Antioxidant properties of perilla leaf and seed extracts, as well as individual chemical constituents, have been extensively studied in experimental models with limited therapeutic applications evaluated.

In vitro modeling has been used to describe anti-inflammatory properties of perilla. A marked influx of neutrophils and formation of leukotriene B4, along with changes in thromboxane B2 levels, was demonstrated in 1 experiment. In another, large increases in prostaglandin levels were seen. In a contact dermatitis model, perilla induced hypersensitivity mediated by leukotrienes, prostaglandins, histamine, inflammatory cytokines, and immunoglobulin E (IgE).Extracts of perilla have also been shown to suppress the overproduction of tumor necrosis factor-alpha, a cytokine important in immunologic and inflammatory reactions. Several anti-inflammatory components of perilla leaf have been identified, including luteolin and tormentic acid.In vitro and in vivo immunoenhancing effects have been described for a crude polysaccharide extract isolated from the leaves of perilla.

Topically applied triterpene acids isolated from dried perilla leaves produced a marked reduction in induced ear inflammation in mice.19 Greatest improvement was observed with the application of tormentic acid, an ursane triterpene. Inhibition of inflammation with this agent was similar to that produced by hydrocortisone and indomethacin. In another study, orally administered perilla leaf extract inhibited acute inflammation in 3 different models, including one for contact dermatitis.

Investigations in vitro and in human subjects revealed that red perilla (1,000 mg of polyphenols) significantly reduced oxidation of low-density lipoprotein (LDL) in 8 healthy young adult female volunteers, which was reflected by a prolongation of oxidation lag time. Additionally, the antioxidant parameters TBARS and lipid peroxide production as well as mobility of LDL were all significantly reduced. In vitro experiments demonstrated that red perilla exhibited stronger antioxidant activity than green perilla and that perilla upregulated superoxide dismutase and catalase.

The inhibitory effects of topically applied tormentic acid on carcinogenesis have been investigated in mice.Similar results have been observed with topical application of a perilla leaf extract; the active principle in this study was thought to be luteolin. The effects of orally administered perilla leaf extract were less marked, and no difference in numbers of tumors was observed between controls and perilla-treated groups at 20 weeks. Reduction in the incidence of mammary and colonic tumors has been associated with perilla oil dietary supplementation in laboratory animals. In vitro experiments with human leukemia and hematoma cell lines have demonstrated apoptotic and cell cycle-arresting properties for perilla leaf extract of greater effect than with rosmarinic acid alone.

The constituent perilla alcohol has been studied in skin, prostate, and breast cancers, as well as for glioblastoma.

In a model of age-related deficits in learning and memory, mice fed a diet enriched with perilla oil exhibited better learning performance and less hyperactive behavior than those fed an alpha-linolenate–deficient diet.30 Apigenin extracted from perilla was found to have limited antidepressant-like effects in mice.31 In mice with stress-induced depression, perillaldehyde reduced the duration of immobility in the forced swimming test.32 An anorexigenic effect has been demonstrated in mice fed apigenin both acutely and after 30 days, with no effect on blood glucose or total cholesterol but with decreased triglycerides.33 In vitro studies suggest chemical constituents of perilla may act via the monoamine transport system to increase monoamine levels and via inhibition of beta-sectretase enzymes to reduce the production of amyloid protein.34, 35

Research reveals no clinical data regarding the use of perilla in diseases of the central nervous system.

Perilla oil is rich in alpha-linolenate; health benefits have been theorized with its use. Serum cholesterol and triglyceride levels decreased in rats fed perilla oil. Beneficial changes in the levels of eicosapentaenoic acid and arachidonic acid were also observed in these animals.39 A trend toward decreased lipid peroxidation was observed in a small study among healthy volunteers who consumed 5 g of powdered perilla leaves for 10 days.11 As a component of medical nutrition therapy for patients with type 1 or type 2 diabetes, the American Diabetes Association Standards of Care (2014) recommend an increase in foods containing alpha-linolenic acid based on beneficial effects observed on lipoprotein profiles, heart disease prevention, and overall positive health in patients with diabetes (moderate quality evidence).

An orally administered perilla leaf decoction resulted in reductions in proteinuria and in the numbers of glomerular and proliferative cell nuclear antigen-positive cells in animals with mesangioproliferative glomerulonephritis.

Clinical trials are lacking to provide dosage recommendations. An extract of perilla enriched to contain 200 mg of rosmarinic acid has been used to treat the symptoms of seasonal allergy.Healthy volunteers consumed 5 g of powdered perilla leaves for 10 days in another study.

Information regarding safety and efficacy in pregnancy and lactation is lacking.

Dermatitis has been reported in perilla oil workers. Patch testing suggests that 1-perillaldehyde and perilla alcohol contained in the oil are responsible for the effect. Two cases of anaphylaxis resulting from oral consumption of 500 mg of perilla seeds have been reported. An IgE-mediated response was documented.

Animals grazing on perilla have developed fatal pulmonary edema and respiratory distress. Perilla ketone, chemically related to the toxic ipomeanols derived from moldy sweet potatoes, is a potent agent for the induction of pulmonary edema in laboratory animals. Highest levels of perilla ketone occur in the plant during the flowering and seed stages. It acts by increasing the permeability of endothelial cells and may not require the presence of cytochrome P450 to increase vascular permeability.

The toxicity of perilla ketone has been examined in several animal species. Low intraperitoneal median lethal dose values were observed for mice and hamsters (5 and 13.7 mg/kg, respectively), with far higher lethal doses being required for dogs and pigs (106 and 158 mg/kg, respectively). Perilla ketone-related pathology in dogs and pigs was primarily hepatic, with only minor pulmonary effects, while mice and hamsters displayed only pulmonary lesions. Enzyme bioactivation of perilla ketone may be required for toxicosis, with species unable to produce the perilla metabolite having reduced susceptibility to its poisoning. The volatile perilla oil contains the aldehyde antioxide that has been used in the tobacco industry as a sweetener; however, this compound may be toxic.