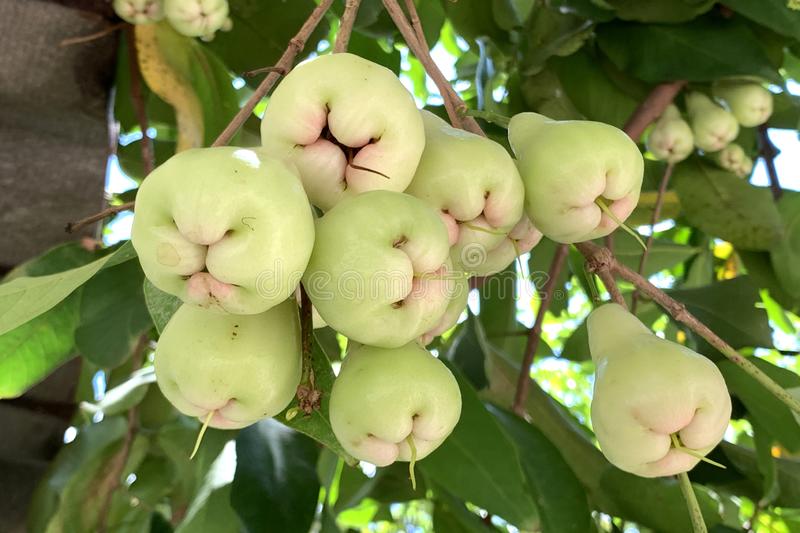 Syzygium jambos, Rose Apple – a Sacred  Tree of Enlightenment from the Land of Jambudvipa

For optimum fruiting rose apples should be fertilized two or three times a year with a general complete fertilizer containing all micronutrients. On high pH soils some micronutrient deficiencies might develop which would require treatment with nutritional sprays.

Rose apples are easily propagated by seeds, with only about 3 years for seedlings to start flower and fruit production. Young trees start to grow slowly, but once well established require very little maintenance. They can be grown as container plants and will easily fruit in pots. The Rose Apple is cultivated and naturalized in many parts of tropics, including India, SE Asia, and the Pacific Islands. It was introduced into Jamaica in 1762 and became well distributed in Bermuda, the Bahamas, the West Indies and, at low and medium elevations, from southern Mexico to Peru.

In 1825 few young trees were taken from Brazil to Hawaii by ship. The rose apple became naturalized on the islands of Kauai, Molokai, Oahu, Maui and Hawaii. In 1893, it was reported as already cultivated in Ghana. It is semi-naturalized in some areas of West Tropical Africa and on the islands of Zanzibar, Pemba and Reunion. It is believed to have been first planted in Queensland, Australia, about 1896. A tree obtained from an Italian nursery has grown and borne well on the coastal plain of Israel.  The Rose Apple was introduced into Florida, at Jacksonville, around 1877. In California, it is planted as far north as San Francisco. It flourishes in the tropical and subtropical climates and grows from sea level to 3000 ft elevation in its native range.  In Jamaica, it is naturalized from near sea-level up to an altitude of 3,000 ft; in Hawaii, from sea-level to 4,000 ft. In India, it ranges up to 4,400 ft; in Ecuador, to 7,500 ft. At the upper limits the tree grows vigorously but may not bear fruit.

This is what is for sale currently:- In 45 litre grow bags.