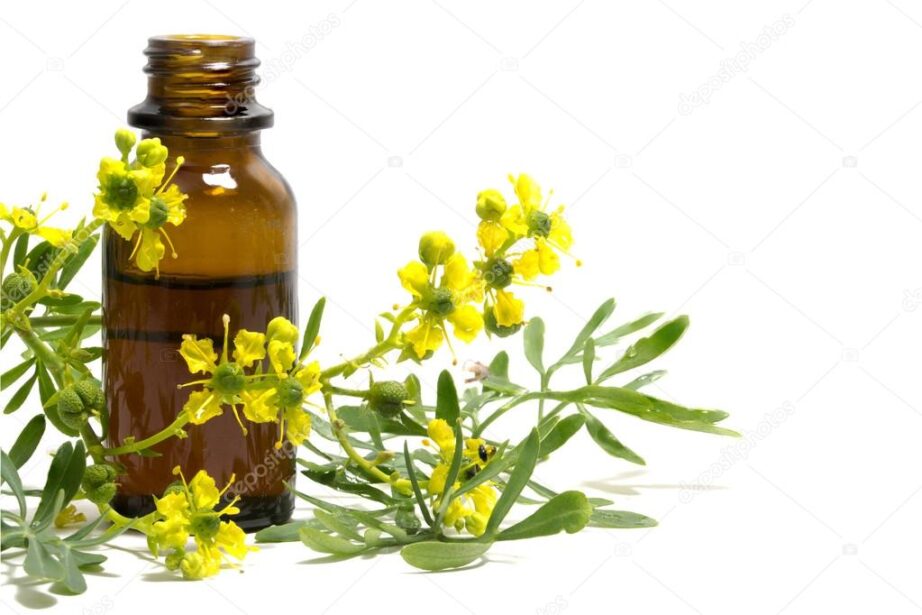 ut you can munch on the leaves by adding them to salads or other prepared foods.
Use: Rue is a headache reliever, but don’t expect it to cure a migraine.
Cautions: Pregnant women should avoid this plant

Ruta graveolens [L. strong smelling rue], commonly known as rue, common rue or herb-of-grace, is a species of Ruta grown as an ornamental plant and herb. It is native to the Balkan Peninsula.

It is now grown throughout the world in gardens, especially for its bluish leaves, and sometimes for its tolerance of hot and dry soil conditions. It is also cultivated as a medicinal herb, as a condiment, and to a lesser extent as an insect repellent.
Traditional use

In the ancient Roman world, the naturalists Pedanius Dioscorides and Pliny the Elder recommended that rue be combined with the poisonous shrub oleander to be drunk as an antidote to poisonous snake bites.[2][3]
Illustration in the Tacuinum Sanitatis

The Tacuinum Sanitatis, a medieval handbook on wellness, lists these properties of rue:

The refined oil of rue is an emmenagogue and was cited by the Roman historian Pliny the Elder and the gynecologist Soranus as a potent abortifacient (inducing abortion).{Natural History Book XX Ch LI}

Rue has a culinary use, but since it is bitter and gastric discomfort may be experienced by some individuals, it is used sparingly. Although used more extensively in former times, it is not a herb that is typically found in modern cuisine. Today it is largely unknown to the general public and most chefs, and unavailable in grocery stores.[5] It is a component of berbere, the characteristic Ethiopian spice mixture, and as such is encountered in Ethiopian cuisine. Also in Ethiopia, fresh rue is dipped in coffee before drinking it.

It has a variety of other culinary uses:

Rue is also grown as an ornamental plant, both as a low hedge and so the leaves can be used in nosegays.

Most cats dislike the smell of it, and it can, therefore, be used as a deterrent to them (see also Plectranthus caninus). Caterpillars of some subspecies of the butterfly Papilio machaon feed on rue, as well as other plants. The caterpillars of Papilio xuthus also feed readily on it.
In South India, rue is recommended for home gardens to repel snakes (however the effectiveness is unknown).

Rue was also a common ingredient in witchcraft and spell making. In the Middle Ages it was a symbol of recognition between witches. The Catholic Church also used a branch of rue to sprinkle holy water on its followers: during this time it was known as the “herb of grace.” Hasidic Jews also used it. Henry