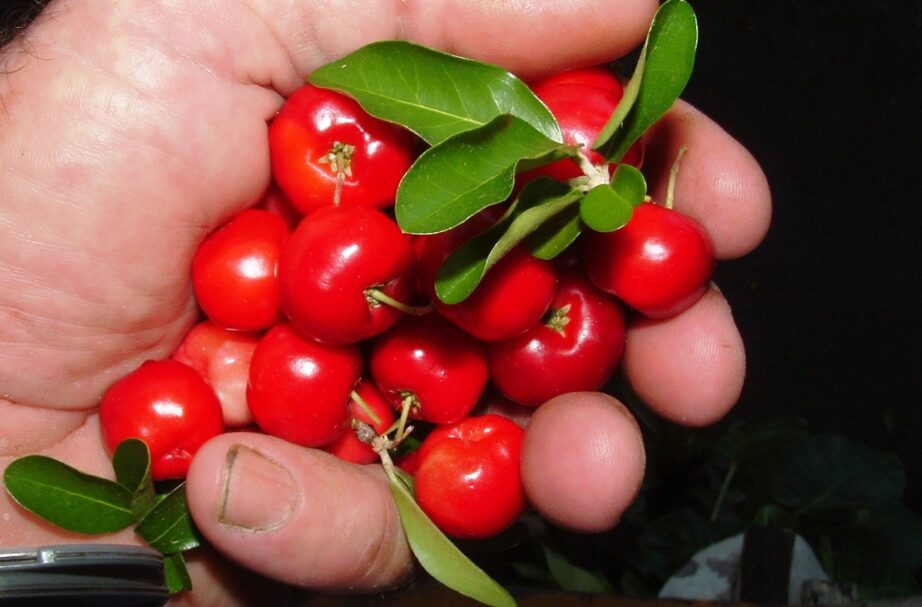 Malpighia emarginata is a tropical fruit-bearing shrub or small tree in the family Malpighiaceae.

I also have some large advanced acerola cherry plants which have already fruited in large grow-bags.Ask if interested

It is known for being extremely rich in vitamin C,almost as much as camu camu, although M. emarginata also contains vitamins A, B1, B2, and B3, as well as carotenoids and bioflavonoids, which provide important nutritive value and have antioxidant uses.

Malpighia emarginata is originally from Yucatán, and can be found in Mexico, Central America, the Caribbean, South America as far south as Peru, and the southeast region of Brazil, and in the southernmost parts of the contiguous United States (southern Florida[6] and the Lower Rio Grande Valley of Texas).[6][7][8] In Florida, it can be grown in protected locations as far north as Cape Canaveral.[9] It is cultivated in the tropics and subtropics throughout the world, including the Canary Islands, Ghana, Ethiopia, Madagascar, Zanzibar, Sri Lanka, Taiwan, India, Java, Hawaii, and Australia

Acerola can be propagated by seed, cutting, or other methods. It prefers dry, sandy soil and full sun, and cannot endure temperatures lower than 30 °F/-1 °C. Because of its shallow roots, it has very low tolerance to winds.
Description

Acerola is an evergreen shrub or small tree with spreading branches on a short trunk. It is usually 2–3 m (6.6–9.8 ft) tall, but sometimes reaches 6 m (20 ft) in height.
Leaves

The leaves are simple ovate-lanceolate, 2–8 cm (0.79–3.15 in) long, 1–4 cm (0.39–1.57 in), and are attached to short petioles. They are opposite, ovate to elliptic-lanceolate, and have entire or undulating margins with small hairs, which can irritate skin.
Seeds can take from a few weeks to several months to germinate.Be patient
Malpighia emarginata fruit

After three years, trees produce significant numbers of bright red drupes 1–3 cm (0.39–1.18 in) in diameter with a mass of 3–5 g (0.11–0.18 oz). Drupes are in pairs or groups of three, and each contains three triangular seeds. The drupes are juicy and very high in vitamin C (300–4600 mg/100g) and other nutrients. They are divided into three obscure lobes and are usually acidic to sub-acidic, giving them a sour taste, but may be sweet if grown well.

As food-The fruit is edible and widely consumed It is cultivated elsewhere for its high vitamin C content. About 1677 mg of vitamin C are in 100 g of fruit. The fruit can be used to make juices and pulps, vitamin C concentrate,[ and baby food, among other things.

A comparative analysis of antioxidant potency among a variety of frozen juicepulps was carried out, including the acerola fruit. Among the 11 fruit pulps tested, acerola was the highest-scoring fruit, meaning it had the most antioxidant potency, with a Trolox equivalent antioxidant capacity score of 53.2 mg.