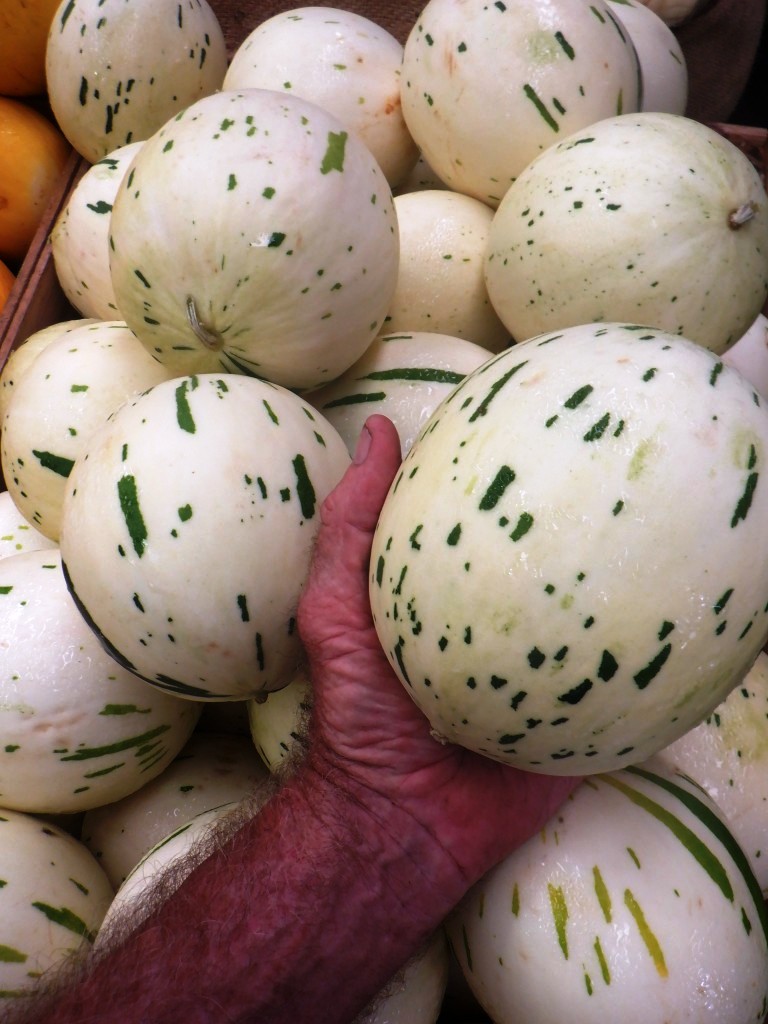 Dino melons are small to medium fruits, similar in size to a small honeydew, and have a uniform, round to oval shape. The rind is smooth, firm, and thin with a white to ivory base, covered in light and dark green striping, specks, and spots. Underneath the surface, the white flesh is dense, crisp, tender, and aqueous, encasing a central cavity filled with brown, flat seeds and white membranes. Dino melons are aromatic and have a very sweet, subtly honeyed flavor with a hint of tartness. The flesh consistently averages 12 and above on the Brix scale, which is a high measurement of the amount of sugar found within the flesh, giving the melon its sweet taste.

Dino melons are available in the winter through early spring.

Dino melons, botanically classified as Cucumis melo, are a relatively new, sweet melon variety belonging to the Cucurbitaceae family. The melon is exclusively grown through Agricola Famosa in Brazil and was first introduced into Europe in 2015. Dino melons are whimsically named after their resemblance to a dinosaur egg with its speckled, white and green flesh, and they are also known as Snowball melons in Great Britain. The melons are considered to be a specialty variety, only grown in limited quantities, and their growing season peaks during the winter months, which is typically the off-season for melon production. Dino melons are known for their high sugar content, earning the title as one of the sweetest tasting varieties available in commercial markets for fresh eating.

Dino melons are mainly comprised of water, which can contribute to hydration, and provide low amounts of vitamins A and C, which are antioxidants that can help strengthen the immune system and have anti-inflammatory properties. The melons also contain some magnesium, folate, and potassium.

Dino melons are best suited for fresh applications as the juicy, sweet flesh is showcased when eaten straight, out-of-hand. The flesh can be easily removed from the rind and sliced for fruit bowls, salads, and appetizer plates. Dino melons can also be incorporated as a topping over ice cream, yogurt, and oatmeal, chopped into salsa, blended into sorbet, juiced and mixed into smoothies, fruit juices, and cocktails, or pureed, combined with water and sugar, and simmered into a simple syrup. Dino melons pair well with cheeses such as feta, cottage, and mozzarella, meats such as poultry, turkey, and fish, seafood, cucumber, citrus, strawberries, and herbs such as mint, basil, and cilantro. Whole Dino melons will keep at room temperature until ripe. Once cut, the sliced pieces of flesh should be stored in an airtight container for up to three days.

Melons are considered to be the fastest-growing specialty fruit category in British commercial markets, and many new varieties, including Dino melons, are being introduced to compete with the popularly sold yellow honeydew. Dino melons are heavily marketed in Great Britain as a Christmas variety and are sold under the name Snowball, a descriptor created from the melon’s white flesh and round shape. The melons are especially loved as a healthy appetizer or dessert during the holiday season, providing a reprieve from the heavier holiday dishes. The melon is also a favorite of children for its sweet flavor. During holiday festivities, Dino melons are eaten straight, out-of-hand, sliced into unique shapes and drizzled in yogurt, or are hollowed out and filled with spiked fruit punch to create a celebratory serving bowl.

Dino melons were developed in Korea from a proprietary, protected parentage and were believed to be related to the white honeydew melon. The seeds of Dino melons were later given to Agricola Famosa, the largest melon growers in Northeastern Brazil, where they adapted multiple cultivation techniques to grow the variety successfully. Agricola Famosa is currently the exclusive grower of the melon, partnering with distributors around the world. In 2015, Dino melons were released to consumer markets in Great Britain and were also introduced at the Amsterdam Produce Show in 2016.

The specialty variety continued to see increased commercial success in Europe and was eventually released to American markets in 2019. Today Dino melons can be seasonally found through specialty grocers in Europe, Australia, South America, and the United States.